AMD has taken the wraps off its next-generation Ryzen 5000 Series desktop CPUs, based on the updated ‘Zen 3’ architecture. The new processors are said to offer up to a 26 percent increase in performance in gaming and a 19 percent improvement in instructions per cycle compared to the current Ryzen 3000XT series. The company is touting better single-core as well as multi-core performance. The Ryzen 5000 Series desktop CPUs are drop-in compatible with current-generation 500-series motherboards following a BIOS update.

Four new CPU models have been announced: the Ryzen 5 5600X, Ryzen 7 5800X, Ryzen 9 5900X, and Ryzen 9 5950X. At the top end, the Ryzen 9 5950X features 16 cores and 32 threads with base and boost speeds of 3.4GHz and 4.9GHz respectively and 72MB of total cache memory. It will be priced at $799 (approximately Rs. 58,760 before taxes). AMD claims the highest single-threaded performance of any “desktop gaming processor” in addition to having more cores for better multi-core performance across mainstream (non-workstation) desktop CPUs.

While the three Ryzen 9 and Ryzen 7 models have 105W TDPs and will not come with a stock cooler, the Ryzen 5 5600X has a 65W rating and will come with AMD’s Wraith Stealth cooler in the box. AMD has so far bundled coolers with nearly all its high-end CPUs, although enthusiasts might prefer their own higher-end heatsink or liquid-cooling thermal solution. 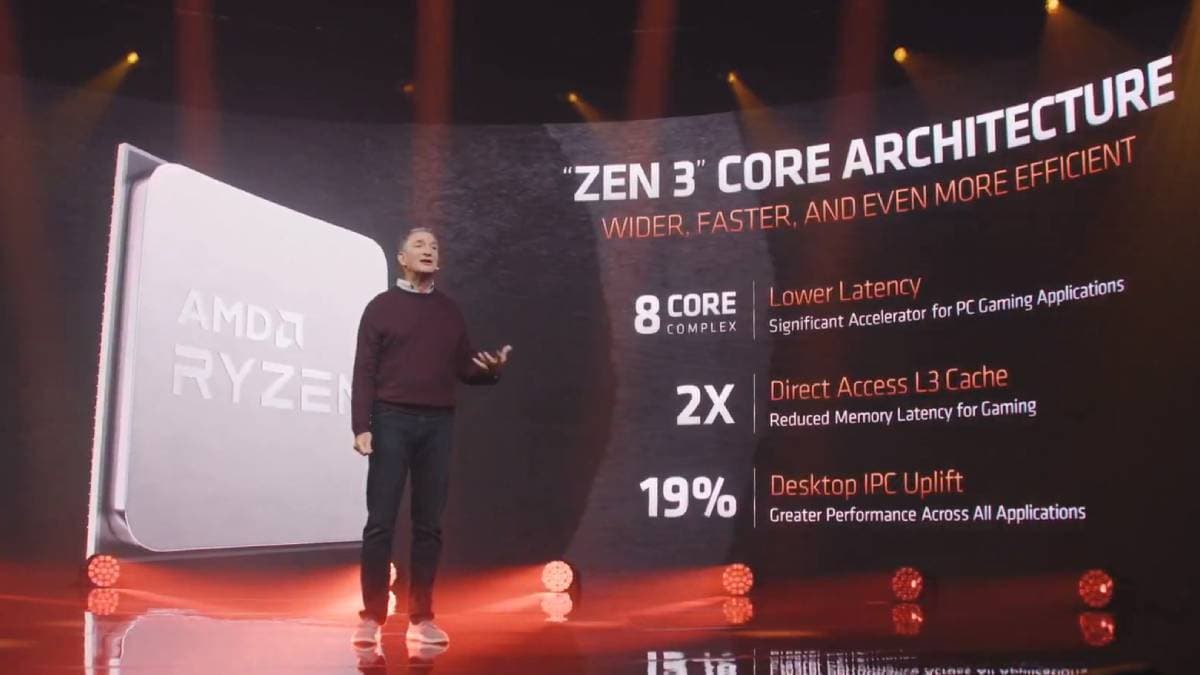 By skipping a number and going from the 3000 series to the 5000 series, AMD will be able to unify its naming scheme across desktop and mobile Ryzen processor lines so that they reflect the same architectural generation.

During the presentation, AMD CTO Mark Papermaster said that the Zen 3 architecture delivers “absolute leadership” for desktop CPUs thanks to the most significant architectural overhaul since the introduction of the first-generation Zen architecture in 2017. He also confirmed that Zen 4 is in active development and will use a 5nm process.

AMD CEO Dr Lisa Su closed the show with a preview of the performance of a Radeon RX 6000 ‘Big Navi’ series GPU, which is due to be launched on October 28. The GPU was said to be running with a Ryzen 5900X CPU, and was able to push out 61fps in Borderlands 3 at 4K using the Badass quality preset.

Intel strategically teased information about its upcoming 11th Gen ‘Rocket Lake’ desktop CPUs for gaming just a day prior to AMD’s announcement. Intel’s next generation will launch in the first quarter of 2021, and performance comparisons are not likely to be made before then.