HomePod mini, Apple’s new smart speaker, has been launched alongside the iPhone 12 models at its ‘Hi, Speed’ event on Tuesday. As the name suggests, it is a smaller version of the HomePod that was first introduced in late 2017. The HomePod mini is about half the size of the original HomePod but follows the same design aesthetic, though with a new light-emitting touch panel on top. It boasts of Ultra WideBand (UWB) capabilities that allow it to track other Apple devices with the U1 chip and use the information for media controls, door locks, and interacting with other smart home devices.

The HomePod mini is price in India has been set at Rs. 9,900, while in the US, it is priced at $99 (roughly Rs. 7,300) – less than half the price of the HomePod but twice as much as the Google Nest Mini and nearly twice as much as the Echo Dot. It comes in two colour options – White and Space Grey. It can be pre-ordered starting November 6 in India and multiple other countries including the USA, Canada, France, and Germany. Sales are set to begin from November 16. 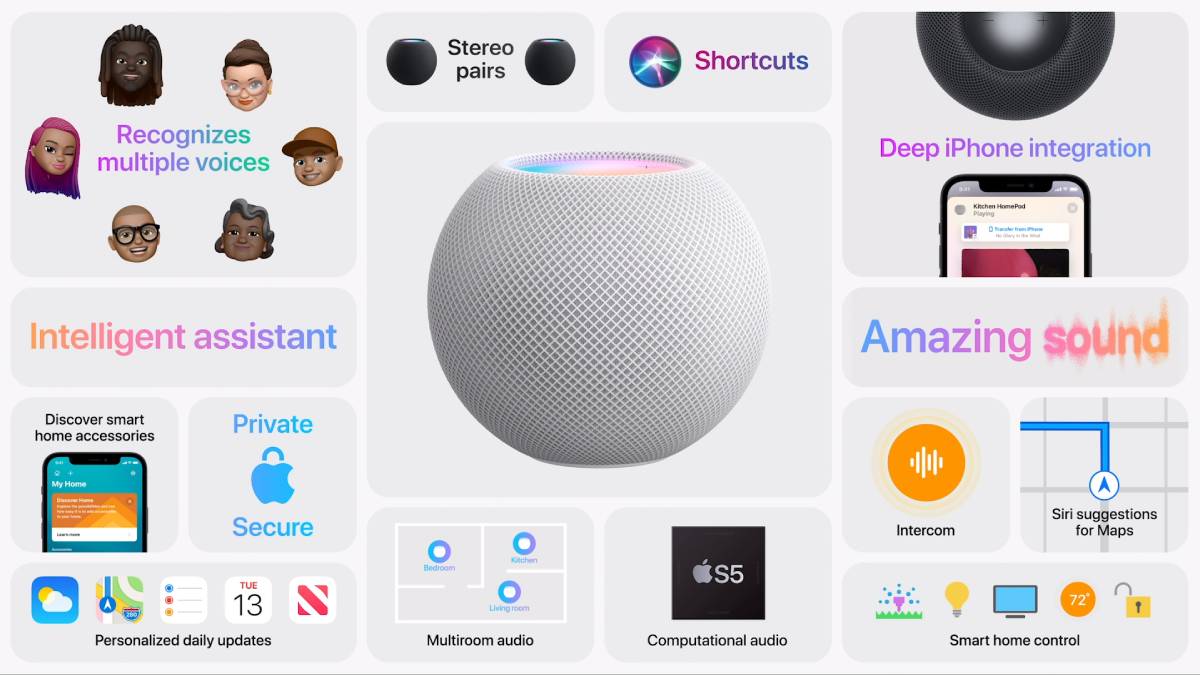 The HomePod mini is powered by the Apple S5 processor, which is also found in the Apple Watch Series 5. It will also include a U1 chip to enable Ultra Wideband support. This will allow for better spatial awareness and accurately tracking the distance between another device with a U1 chip which includes iPhones and Apple Watch models. The HomePod mini uses this location information for taking care of things like brightness, media controls, volume controls, door locks, and more. It can also alert you when a device has been taken from your home. With Ultra Wideband tech and the U1 chip, Apple is looking to provide wider HomeKit support and improved functionality.

A new feature called Intercom allows HomePod users to send messages from one unit to another within a house. It can also work with an iPhone, iPad, Apple Watch, and even car with CarPlay. A message can be played on all speakers through the home or even through AirPods being worn by family members. A simple voice command allows message recipients to respond.

Requests to Siri are not associated with an Apple ID, and the company promises to use strong encryption to protect users’ privacy.

Being a smart speaker, it comes with Siri and you can ask the voice assistant to play music from multiple music streaming apps. For speakers, the HomePod mini has two tweeters, quite a lot less than the seven in the bigger HomePod. There is also a touch-sensitive surface on the top that allows users to control the volume. This design is quite different from the original HomePod, as that had a plastic top with a display.

Are Apple Watch SE, iPad 8th Gen the Perfect ‘Affordable’ Products for India? We discussed this on Orbital, our weekly technology podcast, which you can subscribe to via Apple Podcasts, Google Podcasts, or RSS, download the episode, or just hit the play button below.

Superman Reboot in the Works at Warner Bros. With Ta-Nehisi Coates as Writer, JJ Abrams as Director