Home » Blog » The Mandalorian Season 2 Episode 5 Recap: May the Force Be With You
Blog

The Mandalorian Season 2 Episode 5 Recap: May the Force Be With You

The Mandalorian season 2 hasn’t had much to do for Baby Yoda, except look cute and steal some precious eggs, but episode 5 — titled Chapter 13: The Jedi — made up for that thanks to the introduction of Anakin Skywalker’s Jedi Padawan, Ahsoka Tano (Rosario Dawson), whom we finally got to meet in the flesh. Ahsoka has previously been part of the animated film and the series of the same name Star Wars: The Clone Wars and the follow-up series Star Wars Rebels — she also had a tiny voice cameo in the latest movie, Star Wars: The Rise of Skywalker — and her appearance in The Mandalorian season 2 episode 5 brings her over to the live-action world of Star Wars.

And what an introduction it was. Chapter 13: The Jedi — written and directed by Dave Filoni, appropriate given Filoni co-created Ahsoka, and is central to both the animated series — opens with Ahsoka, as she slices and dices through her enemies with her iconic dual white lightsabers. Even more impressive is how she disappears in the fog, and then reappears elsewhere with the bright shining spectacle that are her lightsabers calling for attention. The dual white lightsabers have always been impressive, but in live-action, they are striking and nearly blinding. Ahsoka is almost like a ghost, and the opening minutes of The Mandalorian season 2 episode 5 make it abundantly clear how terrifying it is to go up against her. 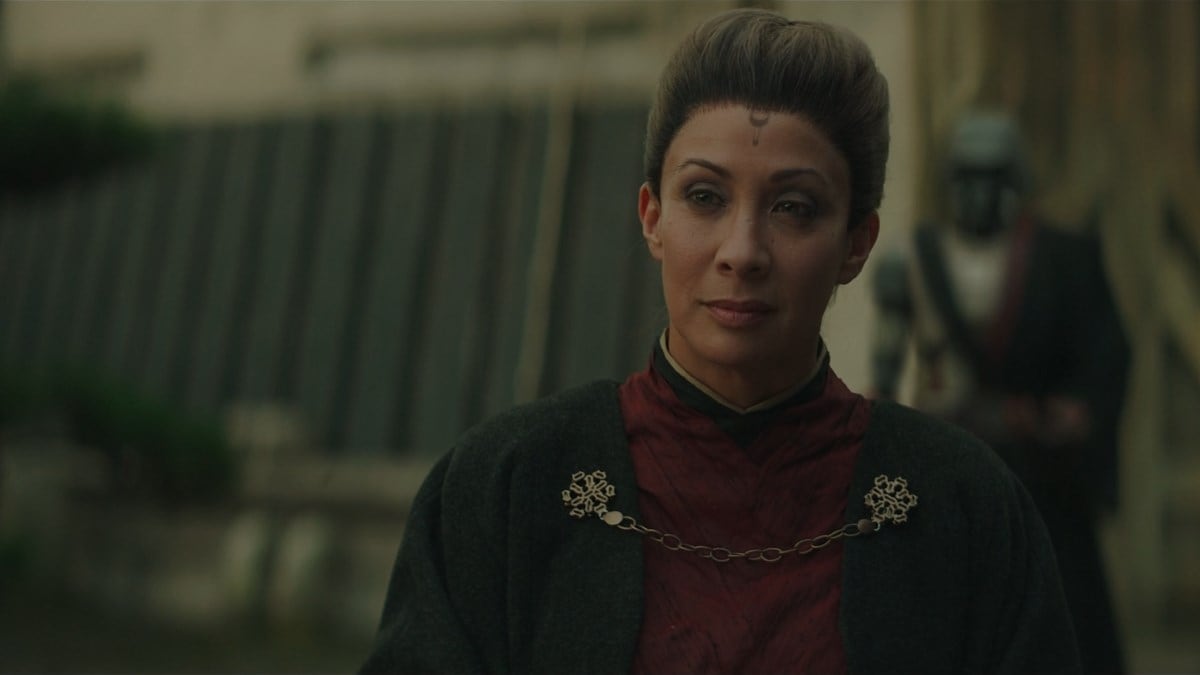 With the stage set, our protagonist Din Djarin / the Mandalorian (Pedro Pascal) flies in and lands outside the city of Calodan — the one Bo-Katan Kryze (Katee Sackhoff) had told him about in The Mandalorian season 2 episode 3 — that exists in what is surely the most ghastly and inhospitable part of the forest planet of Corvus. We learn later that it’s because of the Magistrate of Calodan, Morgan Elsbeth (Diana Lee Inosanto). She helped the Empire build the Imperial Starfleet, and seems to be still at it, helping the remnants or whatever, given the state of the forests around her. It feels like some sort of chemical wasteland, judging by the suits being worn by the guards. And while Morgan relaxes inside her lovely compound, the citizens have been hung up and are being tortured with electric shocks.

The Mando is let into the city of Calodan, for his value as a bounty hunter, and is taken to the Magistrate. She makes him a straightforward offer: kill the Jedi that’s troubling her and the Beskar staff in her possession is his. He accepts, though given he’s been looking for said Jedi for a while, you can tell he’s merely using the Magistrate to his own ends. With directions from the tyrants, Mando sets out into the forest — rather, whatever is left of it — with our favourite Baby Yoda. It doesn’t take him long to come across Ahsoka, who springs at him from behind. The two prove equal to each other, with Ahsoka’s agility making up for Mando’s gadgetry, and the Mando’s beskar able to resist even lightsabers (oh wow), and it’s only Mando’s namedrop of Bo-Katan that cools things down.

Ahsoka is immediately drawn to Baby Yoda the spectator. The two begin to interact even as Ahsoka doesn’t utter a single word — the Force is strong with them — with a curious Mando pacing on the sidelines. Ahsoka reveals that the two can feel each other’s thoughts, and then nonchalantly refers to him as Grogu. “Grogu?” responds a confused Mando, as does everyone in the audience, to which Ahsoka clarifies that yes, it’s his name. Baby Yoda, I mean the Child, finally has a name! But really, Grogu? Baby Yoda sounds so much nicer and rolls off the tongue easier too, than… Grogu. Oh well, this is the way, I guess. At last we know what to call the little green critter, and don’t have to refer to him by someone else’s name. We still don’t know what the species is called though. 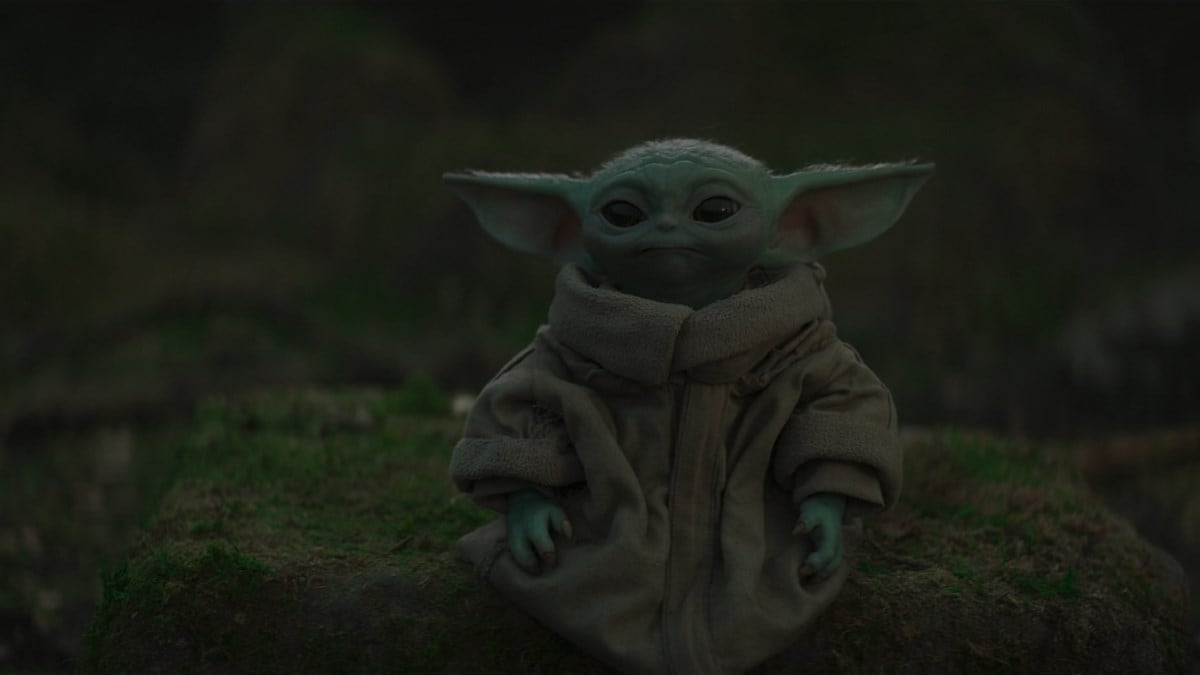 Anyway, The Mandalorian season 2 episode 5 has more important revelations than Baby Yoda’s name. Ahsoka reveals that Grogu was raised at the Jedi Temple on Coruscant — the capital of the galaxy far, far away — where he was trained by many Masters. After the rise of the Empire and the fall of the Republic, Grogu was hidden, but then stolen by someone from the Jedi Temple. Alone and lost for several years, Grogu hid his powers over the years to survive. That’s why his Force power usage is inconsistent, because his abilities have been fading due to unuse and the fear that’s developed in him. And he’s repressed those memories. We’ve known Grogu as the happy, mischievous infant, but The Mandalorian season 2 episode 5 reveals his dark and traumatic past.

And that’s exactly why Ahsoka refuses to train him, because she’s afraid of the path Grogu could take due to the fear, anger and resentment inside him. Ahsoka notes that she’s seen it before, which is a clear reference to her Jedi Master Anakin Skywalker, who as we all know, became Darth Vader. This also plays as a nice parallel to Star Wars: The Last Jedi, wherein Luke Skywalker (Mark Hamill) refused to train Rey (Daisy Ridley) because he had seen firsthand what happened with Kylo Ren (Adam Driver). Except Ahsoka doesn’t come around, even after Mando holds up his side of the deal and helps her deal with Morgan. (The duel between Ahsoka and Morgan is a beauty, and kudos to The Mandalorian team for picking a stuntwoman actress in Inosanto.) 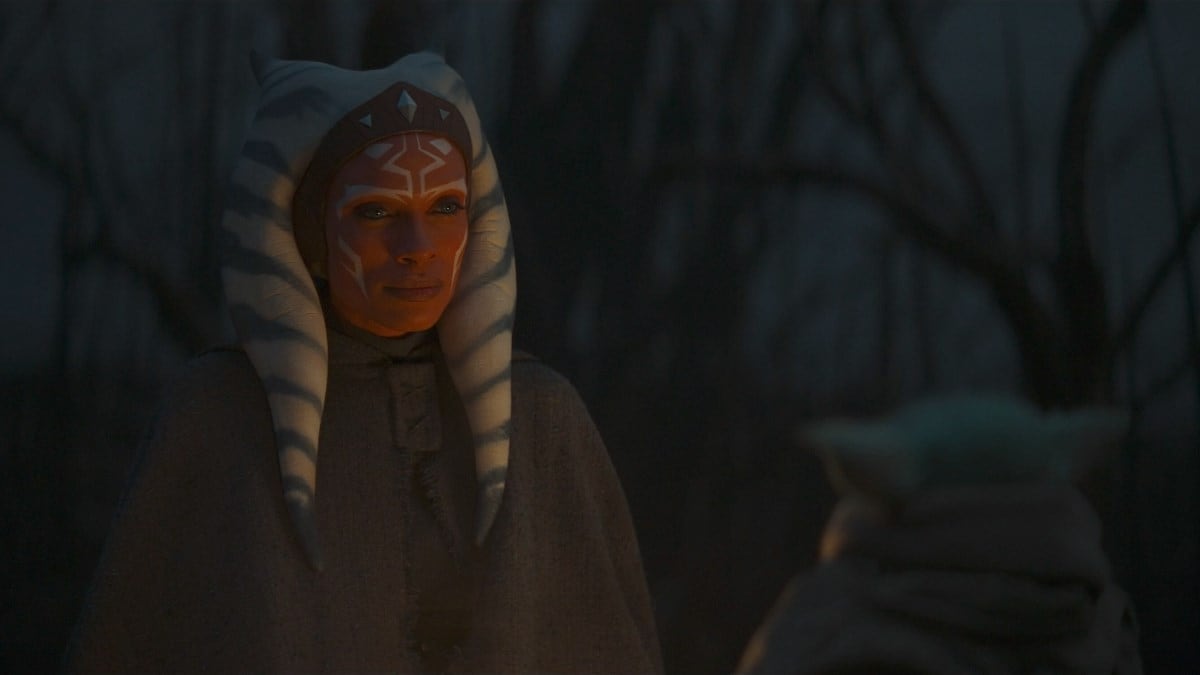 Ahsoka notes that Mando has become like a father to Grogu — it’s he who’s able to get Grogu to use his powers, unlike Ahsoka — and that he should take the child to Tython, where there are the ruins of an old temple. She believes that Grogu should decide his own course, which he can do on Tython by tapping into the energies. If his calls are answered by another Jedi, so be it. Otherwise, it’s up to Mando.

This is also narratively convenient for The Mandalorian, because the show would be very different if Baby Yoda/ Grogu was suddenly not in the picture. Also, The Mandalorian seems to be slowly crafting a spin-off, one that would involve Bo-Katan and/or Ahsoka. Futher proof of this comes in The Mandalorian season 2 episode 5 when we learn that Morgan’s master is Grand Admiral Thrawn, who was part of Star Wars Rebels too. Ahsoka has her own journey, as does Bo-Katan, and this is ripe to become its own series.

What Ahsoka leaves out is that Tython is at the center of the galaxy, and the Mando has always operated in the Outer Rim, where the danger is lesser. What awaits the Mandalorian and Grogu as they head off towards the core? Moff Gideon will be very interested.